So much for keeping track of the development of the whole piece on here. I liked the idea of it but somehow the time to post just slipped away from me. So this post will be a quick skim over the last month and a half of writing Dichroic Light.

As it stands the piece is completely finished and had its premier last week in Glasgow City Halls as part of Edit-Point inaugural concert. You can see the full score and recording at the end of this post.

Oddly for me a name came pretty fast at the end Dichroic Light. Dichroic refers to a certain type of crystal which splits light into two colours and I thought it was a fitting word to use in reference to the two contrasting sounds that of the pure cello (obviously concentrating on cello sounds) and of the electronics (taking the cello sounds and lengthening them, pulling out certain harmonics etc). This is a lot more than I give away in the programme note but hey I think this is the place to do it rather than in a programme. Hmm I might write a post about programme notes…..
Anyway below is an image from wikipedia article on dichroic glass. 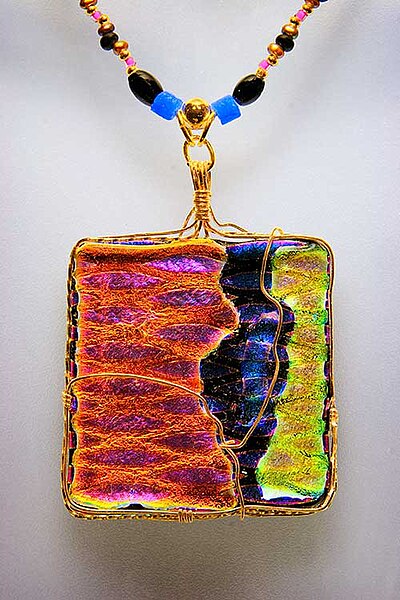 From my previous post the first movement didn’t change too much. Below is pretty much a straight transcription of the hand written score seen before. Also the first idea for the 2nd movement is there. This ended up being completely impracticable because of the speed I wanted it at so most of it got thrown out.

Mark 4 of the score. Once again no change to the first movement but the second is overhauled again with the addition of 4 cellos and removing one note form the string crossing harmonics, Lydia just couldn’t stretch to get into the required position. The idea behind these was that it would signify what is happening in the electronics for the player. Each additional cello would simply be playing a loop that was recorded live. The best place to look to see what I mean is bar 123 and 124. Whats played in the live cello (cello one) is quickly taken up by the 3rd cello. The 2nd cello recorded its sample from the start of the movement. The idea that this stemmed from was to create a sense of stasis in that the material used by the solo cello becomes a background texture.

Below is mark 5 with the rough sketch of the 3rd and final movement. By this point a few changes have been made to the first movement just to expand it a little bit. The 2nd movement is also very close to its final form. At this point I had a realisation with the electronics that it wasn’t going to be possible to record and sync the triplets live. It wasn’t through lack of trying no matter how we tried it or how I changed the patch it just ended up sounding like a mess so we decided to record each line individually and I would sync them up in the studio. This posed a challenge of its own getting them to loop without clicking and without speeding up. After quite a few hours of fixing I got it working. The max end of it was simple but effective, all the loops start playing together but with the volume set to -120db then when queued the volume goes up to 0db. When rehearsing we left them running for a while and after about 20mins they started phasing a little but because the movement is only about 5 mins long thats perfectly fine. If I decide to do the same thing again over a longer period of time I’ll need to cross that barrier.
The inspiration for the 3rd movement was just Lydia singing when she was tuning. Her voice isn’t that of a trained singer and thats exactly why I wanted it. It took a little bit of convincing but eventually she agreed and so the draft of the 3rd movement was written.

I wont bother uploading and describing the various versions up to the final one because most of the changes weren’t anything major. The last movement was expanded a bit more with more detail added in and the 2nd movement continued to be tweaked. The final version of the score can be seen below.

The biggest problem I came across was the electronics or more precisely deciding to rebuild them. Until this piece I had never really used max/msp so it was a massive learning curve. Some point in the middle of February I realised that even though what I had done worked it was by no means the most efficient or straightforward so I rebuilt it from scratch. This took about 20 or 30 hours over 3 days but ended up saving around 15% cpu usage so was well worth it.

Its just dawned on me I dont think I’ve spoken about what the electronics are meant to do and how they do it. At the most basic level the effect is just reverb (‘gigaverb’) but this reverb has both an envelope follower and an eq. The reason for the envelope follower was to prevent the loudest sounds drowning out the quieter ones. For example without the envelope follower the opening notes of the first movement wouldn’t let the upper partials hang on during the pause, they would just be drowned out. This idea of the upper quiet sounds within the cello was eventuated using a comb filter specifically the ‘teeth’ object. The most interesting thing about teeth is that is has a fluctuation setting in it which means that in certain sections it sounds that the note scoops up to itself. Its hard to describe but when you hear it you’ll know what I mean. One of the other jobs of the electronics is panning. The idea was that the reverby stuff would sound like its moving from the cello to the back of the room and fade away into the distance, the idea was relatively effective but I dont know completely how it worked out in the live setting (I was sat side on to the stage with my ear quite close to one of the speakers). The final job is sample playback. The second movement uses both sample playback and panning to give the impression that the sounds move to and from the cellist. When the triplet rhythm is played on the cello the sample pans from the cello’s position before moving to another point in the room and before all the samples stop they move back to the front position. Again the idea seemed to work but having a speaker in your right ear means you can’t quite get the full effect.

I think thats the full run down of Dichroic Light and if you are interested in playing it send me an email and we can talk. In the mean time you can see the score below and hear the stereo mix down of the recording.

First Look at the Score

This site uses Akismet to reduce spam. Learn how your comment data is processed.

Today I'm mentoring at Classical Next at 1pm on Releasing Your Own Music. This is something I've been doing since 2015 and am releasing an album The Remixes later this year. You can hear all my releases so far here https://open.spotify.com/playlist/4f2w6PhS2u38CmXTTNlzNp?si=3a405c002a794053 #cnext22 @scottishmusic #scotlandisnow

Mentoring today at Classical Next on self releasing music at 1pm. There’s still spaces to sign up #composerlife #composer #cnext22 #classicalnext